I was asked recently by Somos Gallery owner Will Devoe if I would like to submit some artwork for his First Friday show that he puts on every month.  I of course accepted and the theme that he chose for this months show is "Character Assasination - Original Character Artwork from Comic to Surreal".  So here are the two pieces that I did for the show.

I decided to take a new approach to these pieces to switch it up and see what else I could do artistically.  I do a lot of cut vinyl work in my graphic designer job and also for my side business, so I decided to take that and create some cool layered vinyl artwork.

I chose these characters based off of some old thumbnail sketches that I had in my sketchbooks.  I then scanned them in and reworked them all digitally in Photoshop and then finished the artwork in Adobe Illustrator to create the vector artwork for cutting the vinyl.  I am pretty happy with the way that they turned out, but I did learn a lot while creating these.  So the next time  I make something like this it will definitely make it easier to do.  Click on the image below to see an animated GIF of my process on one of these pieces I titled "Spike".

I had an awesome time drawing yesterday at the Maximum Comics booth at the Amazing Las Vegas Comic Con.  I did some free sketches for people and even sold some prints of my "All Hail the King" piece.  It was a really good turnout all around and I had a blast.

Below are a couple of the drawing that I did for the con.  The rough pencil sketches were the free ones I did for people at the con, and the fully colored and inked ones I did the nights before the con for sale at the booth.  I think my most favorite free sketch that I did at the con was one of the weirdest requests.  The guy wanted a fighting panda for some reason, because he couldn't think of a hero that he wanted.  At first I was little hesitant, but it turned out to be one of the funnest ones that I did.

Posted by CRS Lozada at 9:09 AM No comments:

All Hail the King!

Here is something that I've been working on lately.  I've been wanting to do a Star Wars and Disney mash up for a while now but never really had the time.  This will hopefully be the first in a series that I will be working on.  I hope you all like it.  Oh yeah, my wife told me to state that she does not approve of depicting these Disney Princesses in a sexual way.  Ha ha.

Here are a few sketches from last nights Dr. Sketchy's Anti-Art at the Artifice here in Las Vegas.  The theme was "Zombies vs. Cheerleaders".  I even won some free comics for a couple of my drawings!   One of them was for the challenge of drawing with your opposite hand.  Great challenge and good practice in case I ever injure myself or something.  All in all good times!

Here's another Coloring Test of Batman versus Superman, based on the Dark Knight Returns storyline.  I found this awesome image that I have never seen before penciled by Jim Cheung and inked by Mark Morales yesterday on deviantart.com, and I knew I just had to color it.

Posted by CRS Lozada at 9:30 PM No comments:

I just came across this amazing line art by the great Leinil Yu that he posted recently.  It's of the Variant Cover for the Age of Ultron 7.  I wondered what it would look like colored so I thought that I might as well practice my coloring on it.  Still trying to find my niche, but I had a lot of fun on this one.  Painted in Photoshop.  Below is my process as usual in an animated GIF form.  Enjoy! 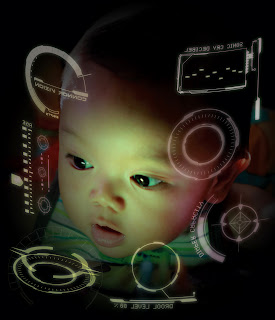 Here is a quick Iron Man HUD (Heads Up Display if you're not a nerd like me) that I did for fun using Adobe Illustrator and Photoshop.  Mostly Illustrator though.  Took about 2 to 3 hours.  Below is a sample of my process.